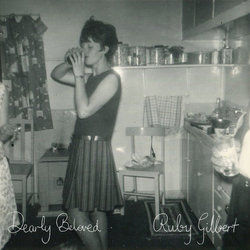 Ruby Gilbert embraces a moody, gothic-tinged style of song-writing. The Brisbane-based songstress is an old soul, inspired by the grittiness of Johnny Cash, whilst channelling a timeless and stylised atmosphere. Her left-of-centre phrasing is unexpected and speaks brutally honest truths. Raw and heart-breaking, her voice evokes an old-time feel, while her lyrics are both strange and endearing.

Ruby draws inspiration from short-lived love affairs, imagined yearnings, betrayal. She speaks of the lonely and cynical side of heart break that no-one likes to speak of or ever thinks to write about. She captures and vocalises feelings and emotions that make her lyrics deeply relatable. Tales of hardship, woe and lost love.

Ruby and producer, Aaron Shanahan (Sunday), play every instrument on her upcoming release, which was recorded during a series of improvised, experimental recording sessions in an underground space. Every track is distinctive and darkly appealing.


Dearly Beloved is a third person view on an abusive, toxic relationship. The most personal and confronting from the EP, the song was written as advice from a close friend to Ruby.