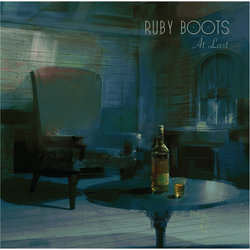 Ruby Boots continue to steam on down the track following the 500+ crowd that danced, cheered and yelled for more at their recent “At Last” EP launch. Five days later, the Boot’s gang were all on a plane headed for showcase performances in Sydney and Melbourne attended by major record company reps, booking agents and promoters.

With the buzz around town, it’s no secret that the Boots have had loads of fun so far with festival dates including the Big Day Out and Laneway, support performances including The Waifs and Wagons, a WAMi music award for best country band and very soon industry showcases in Sydney & Melbourne. All this within 12 months after their first EP launch when Bex ‘Mama Boots’ Chilcott found the right line-up to present what’s basically a toe tapping, knee slapping, ass-shaking great time. The first launch was sold out in less than an hour and kick-started the trailblazer that hasn’t stopped since.

It’s all captured on the latest 6 track recording “At Last”, the launch of which marks the band’s foray into label land with locals Walking Horse and Sydney based MGM Distribution.


Wise Up is about people owning their mistakes and making a change for the better.