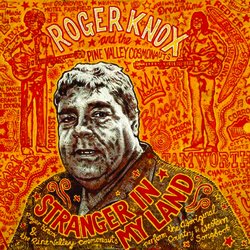 Roger Knox, aka the Koori King of Country or Black Elvis (as he’s known in his homeland), and survivor of TWO plane crashes in ONE day (holy s**t, now THAT'S a country song!), is an Aboriginal Australian Country & Western singer with a honeyed bear hug of a voice.

Back in the 1980s Roger Knox and the Euraba Band (named after the Euraba bush--which supplied him with traditional medicines made by his Aunt to soothe his crash-related injuries) were the hottest act in Australian Country music, black or white.

Artist Jon Langford (Mekons, Waco Brothers) met Knox on a visit to Australia several years ago. When he heard of Roger and the potentially-soon-to-be-lost subculture of the utterly unique cultural collision that is Koori country, Langford knew he had to be involved.

It is powerful and moving material, heartbreaking and hilarious, downtrodden and uplifting, suffused with longing, alienation, resilience and hope; universal themes arising out of largely unexplored context. It possesses the urgency of a Alan Lomax field recording, but with a spirit that remains relevant in today’s world.


Blue Gums Calling Me Back Home

Other tracks by Roger Knox: Stranger In My Country  -  Took The Children Away
%