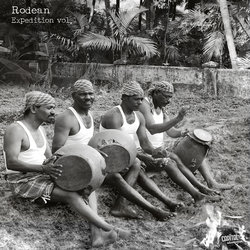 Rodean has managed to reach cosmic heights over his career by sponging up every semblence of musical wisdom and knowledge that was bestowed upon him - when one hears of the journey and the company he's kept throughout, the tale of this love for music takes shape. The fixation with music creation truly began in the hum of computer fans, with his outline in the monitor glow of a bare room experimenting and tinkering with DAWs, hardware and a set of turntables, wrapping his ears around a soundscape of various genres.

Rodean went from being simply a writer, composer and producer of electronic music to a collector of hardware and instruments and studying to become an audio engineer by trade, specialising in synthesis, recording and production.

While adding to the repertoire, he was sewing the seeds of his sound in the Progressive, House & Techno realms through a celestially diverse and eclectic sound that challenged norms and took a hammer to boundaries. This path had seen releases through labels like Renaissance Music, Sudbeat, Onelove, Vapour and CR2 and featuring on releases/packages with profiled artists the ilk of Hernan Cattaneo, Vincenzo, Peter Horrevorts, Minilogue et cetera


Abolim integrates the driving pulses of house music with the complex rhythms and chanting voices of tribal music. Originally sound recordings of farmers were captured by Greg Simmons at a small village in Goa, India. With these recordings, Rodean further composed and produced the recordings into a dance piece song.