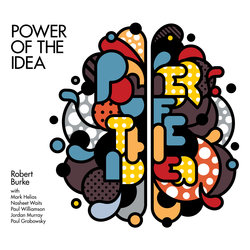 Recorded October 2014 at Acoustic Recording, Brooklyn, the band was to learn and perform the compositions but "...no instructions were given regarding artistic direction in the improvisations, they were inherently connected to the compositions or central ideas developed as a basis of the musical conversation" - Rob Burke.

What can be noted is what is familiar; styles that have influenced both composition and improvisation, including: jazz, classical western music (tonal and atonal), african and pop/rock.

New-York based Mark Helias is one of the most significant bass players on the jazz/improvisation scene. His vast knowledge of music, creativity and innovation makes him such an important figure in the advancement of improvised music.

Nasheet Waits is one of the most in-demand and respected drummers in New York. Nasheet has played with the 'who's who' of current jazz legends.


Excellent opener from Burke's 2015 release Power of the Idea.