Rob Snarski - Turning Off a Memory 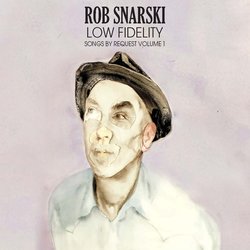 "Rob Snarski owns the purest voice south of the 7-11 that Elvis was lasted spotted at." Thomas Taylor, The Age.

After 25 years as the honey-voiced singer of the Blackeyed Susans, Rob Snarski embarked on a separate solo career in tandem with his revered band.

In 2014, Snarski released his first solo album "Wounded Bird" to critical acclaim and a huge response from fans of his voice and songs. Produced by Rob and Dan Luscombe with Yikesville studio boss Shane O’Mara, “Wounded Bird” foregoes the lush arrangements of The Blackeyed Susans for a stripped-back and intimate sound palette.

Think Ricky Nelson meets Mazzy Star or the Everly Brothers if they’d been raised on a diet of Big Star’s Third.

The songs of Low Fidelity are recordings made by Rob Snarski in his home, singing songs requested by fans. From the hills of Tecoma, the recordings made their way to Shane O’Mara for studio augmentation and mixing. Mastered by Mikey Young, the result is an album that is warm and rich and deliciously stripped back and honest.


Turning Off a Memory is Rob Snarski's cover of the iconic Merle Haggard tune.

Other tracks by Rob Snarski: Graciously  -  You Lie You Cheat
%