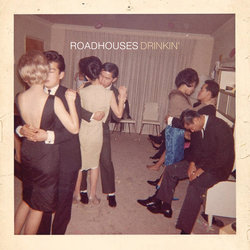 Roadhouses are a Sydney based three-piece that plays sedated rock n roll.
Drawing influences from artists such as Bill Callahan, Yo La Tengo and Karen Carpenter, their sound is tremolo soaked, evoking an empty hotel bar in a Lynch film. They have been described as ‘brooding velvet country’ and ‘heartbreak hotel on codeine’.

Songwriter Yvonne Moxham wrote in various share-house bedrooms before teaming up with drummer Cec Condon (The Mess Hall) in 2014 and slowly started building a cult fan base. After only a handful of shows they travelled to New York to record with Nicolas Vernhes (Deerhunter, The War On Drugs) at Rare Book Room.

Their forthcoming album features songs of intimacy that document half a decade of lessons learned and discarded, parties and aloneness, boredom, desire and dark romance. It will be released in 2018 on Broken Stone Records.


Dinkin' is a country/lounge music crossover that is as compelling as it is hypnotic. Equal parts slowcore and codeine country like Lucinda Williams fronting Spain.