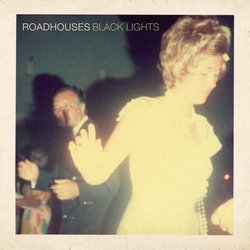 Roadhouses formed in 2014 when guitarist and songwriter Yvonne Moxham invited Mess Hall drummer Cec Condon to play what was meant to be a one off show. In a few months time, they met up again in Brooklyn to put the songs to tape. Recorded in just three days time Nicolas Vernhes’ (The War On Drugs, Deerhunter) Rare Book Room studio, the album is an audio snapshot of Yvonne’s time spent in LA and Sydney.

The self-titled album reveals the slowcore ruminations of Low, the instrumental beauty and musical poetry of Dirty Three and the soulful psych-folk of Linda Perhacs. In this age of instant gratification, Roadhouses will slow your heartbeat and immerse you in bruised romanticism.


Sydney trio Roadhouses announce their long awaited follow up single to 2017’s Drinkin’. The track, Black Lights, is accompanied by a video that was directed by and is taken from their debut self titled album, due out on May 18 via Broken Stone Records.