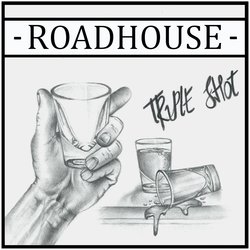 Catchy riffs, booming vocals, thumping bass and banging drums - Brisbane's Aussie Rock 4-piece Roadhouse have been keeping the rock’n’roll spirit alive with the high energy and charisma that they bring to every gig and every track.

From their first live performance in February 2016, Roadhouse (Christopher Byrne - lead vocals, Douglas Eustace - guitar/vocals, Daniel Nembach - bass/vocals & Anthony Trudgett - drums/vocals) have played a multitude of venues across Brisbane, Ipswich, Bundaberg and the Gold Coast, including The Zoo, Woolly Mammoth, Crowbar, Miami Shark Bar, and Dusty’s Bar & Grill. More than just bandmates, the true companionship of Roadhouse makes for a tight-knit friendship and an even tighter performance dynamic as their electrifying stage presence ignites their Hard Rock/Pub Rock fans. The band have carved themselves a reputation for vigorous live shows bolstering well crafted modern rock anthems that get heads banging and crowds moving.

After the release of their well-received debut EP ‘Walking Tall’ in December 2017, Roadhouse are ready to pour rock’n’roll passion into audiences with their upcoming release ‘Triple Shot’ out 3rd August 2018 - three tracks filled to the brim with blazing riffs and intoxicating groove.


‘Long Live Rock N’ Roll’ is track 3 on ‘Triple Shot’, and the song to be featured in their upcoming music video. The track is zealous and punchy right from the start, with the power and high intensity of classic rock n’ roll. Roadhouse "raise their fists", spreading the message of their love of rock that "feeds their soul".

Other tracks by Roadhouse: Take A Seat  -  My Elixir
%