Riot In Toytown - This Illusion 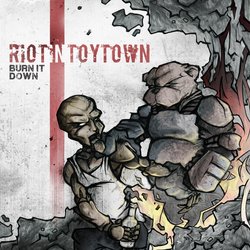 Like all bands worth their salt, Riot In Toytown kicked around in obscurity while honing their craft. Tim Chilman (guitar), Matt Whitelock (bass) and Gangles (drums) first auditioned, then mercilessly executed countless vocalists until Maurice Rodriguez came riding into town on a woolly mammoth. His war cries were enough to convince them that the magic ingredient previously missing from their sonic soup had been divinely sprinkled from above by some god of rock.
And lo! It came to be.

By April 2012 their masterplan was in place. They conquered the sticky carpets of Melbourne, from The Espy to The Evelyn and all points in between, supporting bands such as Engine Three Seven, Branch Arterial and Bellusira.

The second half of 2012 saw them enter the studio to chronicle the journey thus far. Teaming up with Australian ex-pat Jared P. Scott (Helmet, Ben Moody - ex Evanescence, Janes Addiction) they laid ruin to the hallowed halls of legendary Sing Sing studios to complete their debut EP - Burn It Down.

With influences including Electric Mary, Shihad, and Chevelle, Riot In Toytown transcend their breeding to become a thorough-bred racehorse of melodic rock - one you’ll want to ride until you die.


This Illusion is the musical "slow burner" of the debut EP by Riot In Toytown. What it lacks in instant punch it more than makes up for in replayability. It's insidious. You will wake up at 2am humming its melody.

Other tracks by Riot In Toytown: City Lights  -  Move
%