Rick Webster - We'll Never Be Them 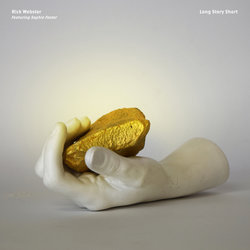 We'll Never Be Them is proof that tone is in the fingers. Rick's fluid, graceful style creates a hybrid that has the emotional depth of blues, with the nimble dexterity of jazz. Bonding this alloy are simple, powerful pop/rock hooks that Rick's songwriting is acclaimed for, fuelling the exceptional call-and-response interplay between his guitar and Sophie Foster's vocals.

Persevering after a near-fatal car accident in 2015, Rick spent months recovering, unsure if he was ever going to be able to play guitar again. The light that saved him from this bleak future was music. Taking the songs in his mind and writing them down on paper, Rick began working on Long Story Short while his broken body healed. The next few years were arduous, but by the end of it all Rick was back to playing at a high level, and was armed with his most potent songs to date.


“We’ll Never Be Them was written whilst travelling around Australia with my now wife, when we found ourselves in a very expensive upmarket bar. The bartender actually asked me “Do you want a cheap drink or a good drink?” I thought it was hilarious and immediately wrote it down to turn into a song!”