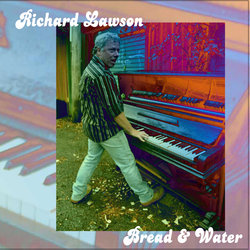 Richard Lawson…singer/multi-instrumentalist/composer/producer/teacher and drummer for the Lime Spiders, the legendary Australian Garage Punk band from the 80’s and 90’s has been touring nationally and releasing a live album by the Lime Spiders on his own label, Added to this were the recent startling 2008/2009 EP releases by his Euro-electronic side project FTR….and running a radio program on Shoalhaven FM…he has been everywhere…seemingly at once!!

Richard is currently touring NSW doing endless acoustic and electronic shows of all his material and is slated to be appearing soon in Melbourne, Sydney and the South Coast. . He is currently returning to the studio to put down another 2 Electronic albums and is also heavily engaged in production of other artists….stay tuned on that one.


A quasi rap/spoken verse leads into a nice New York Soul chorus with lovely melodies and tongue in cheek lyrics. The solo is a standout . One College station said it sounded like a cros between Frank Zappa and Justin Timberlake. I wrote it in 3 separate MacDonalds