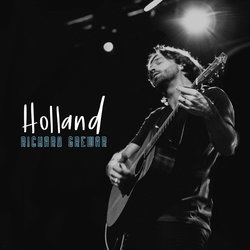 Born in England, raised in Australia and now living in the Black Hills of South Dakota, USA. Richard Grewar's blend of rock, pop and acoustic elements ignite the creation of a soundscape bursting with color, rhythm and mood-altering intensity. Live, Grewar serves up a melting pot of looped acoustic overlays; delivered in real-time. Nothing is pre-recorded. Since relocating to the USA in 2013, Richard has had the honor of being the first ever performer at the Life Is Beautiful Festival featuring headliners The Killers, Kings Of Leon and Imagine Dragons, as well as showcasing alongside White Sea (Morgan Kibby of M83) at the South By Southwest spin-off, SXSWV2V and opening for Le Butcherettes at the Neon Reverb Festival in Las Vegas.

New single “Holland”, which addresses Grewar and his wife’s recent experience with miscarriage, is released everywhere on April 19th, 2019.


Holland tells the story of a father having a conversation with his daughter at various stages of her life, only to realize that the conversations can never actually happen. Based on Grewar, and his wife's, real life experience with a miscarriage.