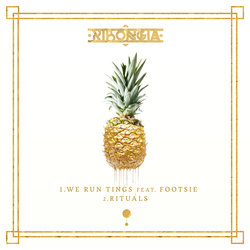 Florence-born, Sydney-based producer Ribongia today shares a double a-side release from his forthcoming record, due for release on October Records next year. The two tracks - "We Run Tings" featuring UK MC Footsie & "Rituals" - delves into Ribongia's afro-percussive and organic influences which he has masterfully produced, performed and laced with lush, live elements throughout.

Known for incorporating and celebrating native Indigenous sounds from across the globe, together with a careful blend of envelope-pushing club sounds, Ribongia’s music reflects his curious mind and cutting edge style like no other.

Following his debut release It Began in 2014 which featured tracks such as "Save The Children" and "Gazela", and his 2016 EP Escapisms which featured "Journeys" and "My Word", Ribongia has gained support from international and national online outlets, triple j & community radio, travelled the country twice over on headline tours, played Field Day, Splendour in the Grass (& a forthcoming slot at Subsonic) and toured Europe with Hermitude, all the while introducing audiences to his distinctive style of worldly electronica.


"Rituals" showcases Ribongia's flair for beautiful and unusual instrumental music, animating the delicate samples with a subtle energy and serving to showcase his range as an artist.

Other tracks by Ribongia: We Run Tings (Feat. Footsie)
%