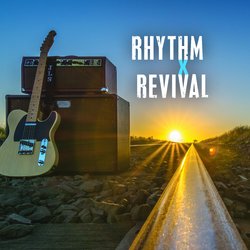 When it comes to reinventing Soul, Country and Blues for a new audience, Melbourne certainly punches above its weight among the great music cities of the world - and a large bunch of Australia’s greatest artists have found their way up from the multitude of sweaty front bar sessions that happen in every corner of the city each weekend.
And now new kids in town Rhythm X Revival pick up the torch and run (fast) with their self-titled debut release.

Rhythm X Revival’s debut is centered around the friendship and songwriting of Victorian boys John-Luke Shelley and Johnny Tesoriero - JL out front and Johnny on the drums - and neither a stranger to the thriving Melbourne scene. The album drips with the influence of Memphis, Nashville, and perhaps a couple of dodgy honkytonks in between, and was recorded by another Melbourne soul man Sam Teskey in the Teskey Brothers’ studio. Rhythm X Revival delves deep into the soul of a far-gone era, while keeping a pace sure to keep things moving on many a festival stage in the coming year.


Man and woman from the second it starts takes you on a journey about the ups and downs of a man and woman. Harmony drenched with a feel that will leave you wanting more.