Renegades of Munk - Help Is On The Way 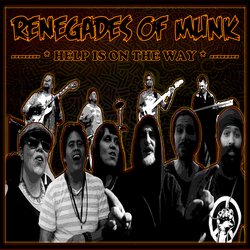 Munki Muk (aka Mark Ross) is a pioneer of hip-hop in Australia. Recently inducted into the National Indigenous Music Awards Hall of Fame for his contribution to the hip hop scene and producing in Australia, Munk and his all star crew the Renegades of Munk are set to release their self titled debut album through Impossible Odds and MGM IN September 2014.

Munk is a proud Jardwadjali/ Wotjobulak man known for his production, mixing skills, rapping, breakdancing and as a radio host on Sydney's Koori Radio. Since 1984, he has been an accomplished MC, breakdancer, producer, videographer and performed internationally as well as nationally.
The self titled debut RENEGADES OF MUNK features a cast of some of Australia's best talents and what a line up it is, some of the names on the album include Rob Hirst, Warren H.Williams, Sean Choolburra, country royalty Anne Kirkpatrick, Slim Dusty Band guitarist Charley Boyter, the legendary Wilma Reading, Kutcha Edwards, Stiff Gins,, Shinobi lead singer and NRL star Eric Grothe Jnr. mixed some of Australia's great new talent including Jimblah, Rival MC from Impossible Odds, Australian Poetry Slam Champion Luka Lesson, L-Fresh The Lion, Dukebox and many more.


The second single from the debut album from Renegades of Munk, Help is on the Way features The Stiff Gins, NeHo, L-Fresh the Lion and Luka Lesson.Reminiscent of the Wu-tang Clan this track is a funk soul gem with a powerful message.