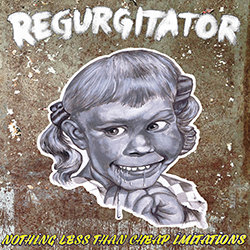 Verging on 22 years since forming late 1993, playing 800 plus live forays since early 1994, Regurgitator release debut live album with Cheap Imitations tour. Regurgitator have always embraced their flaws, their limits, fucked with technology, genre… the entire twisted process. Worked it as hard as they could, pushed all over the place in the quest for bettering themselves, shifted farther and faster than could stay on their feet, and endured time stronger for it. And now the meta-imitation with all the spikes and bumps of this raw and inspired collection of live recordings dating back to Oct 2012 captured over two crazy nights at The HiFi, Melbourne.