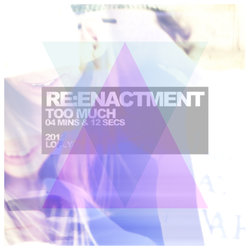 Since 2007, Re:Enactment have become a staple live band in Brisbane with a reputation for bringing the party in a Dance-Rock fashion. As a key band on the excellent DIY collective LoFly Records (Mr Maps, Nova Scotia, Toy Balloon), Re:Enactment are poised to break-through to national & international audiences. The band are managed through Paper Street Records while being signed to LoFly Records.

The band has just finished recording their debut album “Sport,” due for global release March 2012 & will follow this with a national tour. “Sport” was expertly recorded by Stephen Bartlett (Skinny Jean, Mr Maps, The Winnie Coopers) at White Horse Studios, and mixed and produced by internationally acclaimed artist and member of electro outfit Gerling, Burke Reid (The Drones, Pivot, Dan Kelly) at famed Sydney studio Big Jesus Burger. Below is the current single “Higher Duties”

Re:Enactment’s sound is punchy, driving electro-punk reminiscent of bands like Soulwax, Bloc Party, and Yeasayer. See them live and we challenge you not to dance!


"Too Much" is based on that moment when two estranged lovers run out of small talk. They both know when they're talking to each other exactly what the other is feeling but will never openly express in fear that it'll just make everything more fucked.