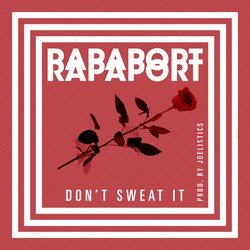 Joel Rapaport is a 34yr old hip hop MC, guitarist and producer, co-founder and managing director of Big Village Records; the creator and director of improvised hip hop and art theatre show, ‘Sketch The Rhyme’; and the founder and manager of hip hop music education organisation, ‘School of Rap’.


Don't Sweat It is produced & co written by Australian Hip hop icon, Joelistics (TZU). The song is about trying to move on after a break up, and finding yourself again.