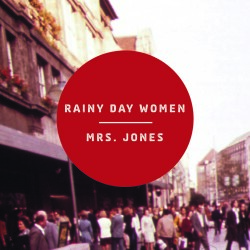 Rainy Day Women signalled their arrival into the Australian music scene in 2012 with their debut single ‘Sleigh Bed’, which went on to win the coveted WAM Song of the Year. Following this came the Friends EP, which resulted in a wave of airplay across community radio and on national youth station triple j, underscored with national touring and recognition of yet another amazing band hailing from the Western coast. A long way to have come given the started as a bunch of friends from school with a shared appreciation for outfits such as The Sleepy Jackson, The Panics, Bon Iver, Elliott Smith, and The Strokes.

An unbridled commitment to penning accessible yet considered pop songs is what has put Rainy Day Women on the map, having won WAM’s Best Pop Act of the Year in 2013, as well as being the most played artist/band on triple j Unearthed. Following their recent single ‘Mars’ comes ‘Mrs. Jones’, another offering from their upcoming album Ain’t It Time. Recorded in a farmhouse near Margaret River in Western Australia where the band set up a makeshift studio, Ain’t It Time will be released through littleBIGMANrecords on September 29.


The tongue-in-cheek ‘Mrs. Jones’ is a nod to those classic songs about fantasying about an older woman. Beginning as a joking jingle between friends, the tune refused to disappear and so was morphed into a twist on classic 50s ‘doo wop’ songs. Mrs. Jones will definitely approve of the result.