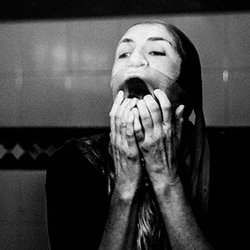 The band draw influences from the likes of The Birthday Party, Savages, PJ Harvey, and Midnight Oil.