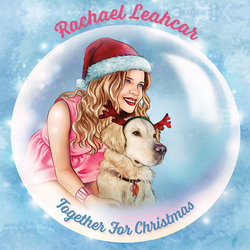 Rachael Leahcar smashed Australian television records and was nominated as ‘TV Moment of the Year’ in the AACTA Awards when 4.1 million people tuned in to watch her Blind Audition on the first season of The Voice (2012). With a career that has seen her release four top 10 ARIA charting albums, tour live shows to sold out crowds and travel to Italy to sing with Andrea Bocelli’s orchestra, Rachael has shown that she is capable of achieving anything despite being legally blind.

Rachael’s last album, Shadows (2017), debuted at #5 on the Australian Album ARIA Chart. Shadows marked Rachael’s transformation from a shy teen to a strong young woman and featured her skilful songwriting, earning her the People’s Choice Pop Award in the South Australian Music Awards.

Celebrate the joy of Christmas with Rachael’s latest Christmas-themed album, ‘Together For Christmas’! Featuring 14 classic carols, 6 different languages, 4 beautiful duets and a dollop of love, this is a gift for everyone.

“I hope everyone has a wonderful Christmas filled with love, happiness and kindness! Remember that no matter where we’re from, what language we speak or our beliefs, we are all human and equal.”


This is THE power ballad of Christmas! It begins with a beautiful acoustic guitar introduction, allowing the song to blossom throughout. It also includes a haunting saxophone solo and a verse in the romantic French language, adding the cultural diversity that the full album embodies. This song was produced by Quentin Eyers.