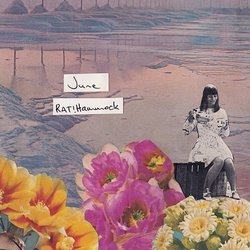 Comprised of Jackson Phelan, Tom Dowling and Jack Nicholson, the band first formed in early-2017 and have been slowly honing their sound since then. What they’ve achieved in eighteen months, though, is impressive, with the band quickly carving their name into Melbourne’s notoriously tough-to-crack music scene. The band’s irresistible single ‘Power’, released in February 2018, landed plays on triple j, Triple R and PBS FM, and earned raves from core triple j Unearthed staff. That’s just the beginning of it: the release of ‘June’, the band’s newest single, looks to increase their fledgling fanbase significantly. Equal parts dreamy and quirky, ‘June’ turns RAT!hammock’s style technicolour, adding in new vocal modulations, anthemic breaks and gorgeous backing vocals courtesy of Merpire. This growth in songwriting prowess and technical skill coincides with a significant growth in profile: RAT!hammock are set to showcase at BIGSOUND this year, release a
sophomore EP, and play launches in support of ‘June’. It’s going to be a significant six months
for the band, but they’re more than up to the challenge.