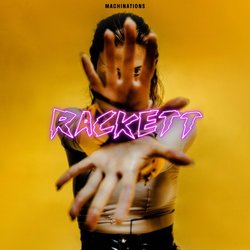 RACKETT is all about thriving in the chaotic unknown. The first of many releases to come from RACKETT over the next year, the single is a snapshot of the musician’s innate desire to chase change and creative challenge. “[‘Machinations’] means to create a sense of delusion, a scheme. The chorus, “Out of my mind, imaginations got me out running wild, remember that time I fell out of my mind, into machinations,” summarises a feeling of grand delusion. I lost my mind, devising a plot to move forward.” Rebecca Callander

The last few years have seen RACKETT emerge and become established as one of Sydney’s premier live groups. Garnering attention off the back of their debut EP Ready Or Not in 2017 and then in 2018 with the impactful single ‘Prey’ for captivating music and a bombastic live show to match, RACKETT’s wild ride continued to play out on stages across the country. Dominating as headliner and festival favourite at events including Lost Paradise, Groovin The Moo, Big Pineapple Festival and Jack River’s Electric Lady Festival, while also being selected by The Rubens as finalists of their EXTRA SUPPORT YouTube competition.


Packing the eccentricity and punk attitude of artists including Robyn and CSS, with the glitchy electro-rock that has made bands like the Yeah Yeah Yeahs so beloved with indie and rock fans alike, the new sound from RACKETT is bright and fresh. As musician Rebecca Callander navigates a wild and unrestrained sonic terrain, ‘Machinations’ is a strong statement of intent.