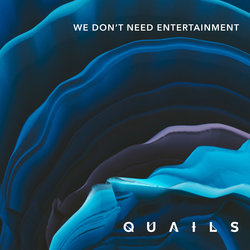 QUAILS is the solo project of singer/songwriter/producer Amy Pes. QUAILS delivers tormented, honest lyricism merged with emotionally deep production. Navigating a digital river of synthesis and sentiment, QUAILS writes music for the ardent and the impassioned.

Connecting the dots between electronica, R&B and moody pop, QUAILS’ self-titled debut EP brought two songs to the attention of many. “High Hopes” and “With You” picked up radio play, club play and sync spots in hit TV shows ‘Lucifer’, MTV’s ‘Catfish’ and ‘The Wrong Girl’. Following release of the debut EP, QUAILS collaborated with up and coming artists Max Liese, Sondrio, Lockjaw and Jordan F, the latter collaboration securing a sync in the Netflix movie ‘Death Note’.

After a year spent traveling, writing and recording, QUAILS will begin 2018 with the release of sophomore EP ‘Worlds’, a six track excursion into the space between love and loss.


“We Don’t Need Entertainment” is the first single from QUAILS’ forthcoming sophomore EP ‘Worlds’ - a six track excursion into the space between love and loss. Co-produced by Quinn, the single captures a potent mix of elegance and power and connects the dots between electronica, R&B and moody pop.