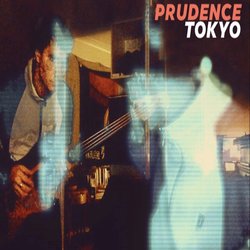 Prudence is moniker and recording project of Tom Crandles, a composer and session bass player who thinks too much.

Known previously for his work as shoegaze outfit COLOURS, as well as one half of the Sydney based band Au.Ra, Prudence began naturally as a fresh song writing endeavour, initially recorded in bedrooms and hotel rooms across the UK and Europe.

On his debut release Major Tom (May 2019) Prudence offers his own idiosyncratic vision of the world – one that feels electric yet effortless; a natural disaster of melody and noise.

Drawing on his own tragic comedy to capture the vagaries of relationships we’ve all been through, Prudence charts the full scale of human impulses; the desire, the ache, the uncertainty, and the bitterness.

With musical influences that range from Anna Domino to Swans, Mick Karn to Anita Lane, Devo and Talk Talk, Prudence’s output is genre-defying yet always underpinned by the richness and complexity of its song-writing.


'Tokyo' started one night in 2017, whilst Tom was browsing radio frequencies in a Shibuya hotel room. After discovering pirate radiostations airing mysterious furniture music, he recorded himself tuning the radio onto a dictaphone to capture the atmosphere. After rediscovering the recording in 2019, he began adding textures and melodies to the composition whilst arranging it into one cohesive piece.