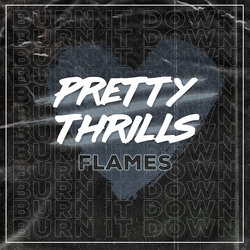 Pretty Thrills – Sydney's brand new rock trio – are starting their debut with 3 minutes of flair and fire with their single 'Flames' (out 18th of October).

Formed from the ashes of a previous act, brothers Max and Bryce Donnellan and friend Josh Bernard have pieced together a thrilling new project that meets between the worlds of pop-rock and post-hardcore.

Pretty Thrills wrote 'Flames' to express the highs and lows with illicit drug use, painting a clear picture of the reality of the tragedy that comes from it. Using the verses and chorus in a light vs dark perspective, the band explore in one moment everything is in ecstasy. Then – through the chorus – they explore the inevitable low with the final line, "I'm going down with the flames".

Pretty Thrills are debuting with an exhilarating single that showcases both their pop-rock and heavy/ hardcore music influences making this an invigorating new addition to the rock music scene.

The band have plenty more up their sleeve and should be one to keep an eye on.


Fueling this debut single are pop-rock guitar-riffs, electro-synths, a high-powered drum beat and a commanding vocal delivery from Max Donnellan who transitions tonally from soft, breathy verses, into the demanding choruses.

This is all followed by an enrapturing bridge as the band gets explosive in half-time as Max belts out the lyrics, "Burn it down".