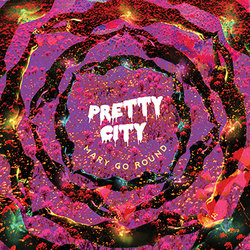 At its inception, Pretty City combined their love of shoegaze stalwarts like the Jesus and Mary Chain and My Bloody Valentine with the 90s fuzz rock of The Smashing Pumpkins.
This exciting chemistry has been poured into the studio, with the band recording their debut album. The first half of 2015 has been spent capturing the undeniable onstage energy and translating it into the studio environment. The band’s ‘Triple A single’, which included ‘Melt’ and ‘Running Around’, has played on community and commercial (including Triple J and Triple M) radio in Australia.

As well as tireless studio efforts, 2015 is off to a flying start in the live arena as well with the band completing a successful national tour in support of their triple single release in June. The band has also supported Ecca Vandal and 90s band, Jesus Jones at the Corner Hotel in Melbourne, and is set to support The Hoodoo Gurus in November.

As well as their own East Coast tours, Pretty City supported Stonefield, played a festival alongside Lurch and Chief and Drunk Mums, and finished off the year playing New Year’s Eve at the Espy alongside Kingswood, DZ Deathrays and the cream of Australian music.


Pretty City’s second single release this year and captures the band’s growing prowess in the live setting. Recorded at 1am after a live show, the song features heavy riffs, explosive drums, and raspy, punchy vocals punctuated by glam inspired lead melodies to counterbalance the heavy grooves of the rhythm section.