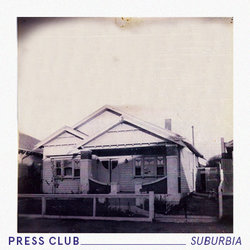 Press Club get off on the good foot for 2018 with the release of ‘Suburbia’ the third single from the band’s imminent debut album “Late Teens”.

Conceived in a garage in Brunswick, the band worked the song from the verses up. Natalie Foster’s introspective lyrics are brushstrokes of different pigment from the same pallet. Dissecting the need for belonging, sense of one’s self and feelings of emotional and physical isolation.

Bassist Iain MacRae citing that they “experimented with sounds, and the arrangement of the song to try and bring a vaster dynamic range to the album”.
The single’s artwork features an early 1960’s photograph of MacRae’s family home where the band spent a considerable amount of time refining their songs prior to putting “Late Teens” to tape.

‘Suburbia’ will be independently release on Feb 23rd.

Tour dates and tickets via www.pressclubmusic.com


‘Suburbia’ was recorded live in one day during the “Late Teens” sessions at The Aviary Studios in Melbourne. As with all of their work it was completely self-produced by the band and engineered by the band’s guitarist Greg Rietwyk.