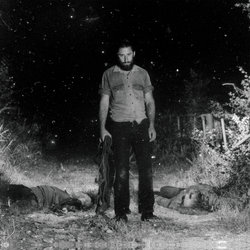 Pony Face continuously defy definition. In their short career the band have released an EP and two blissful, brooding albums; the second, Hypnotised, propelling them to the national stage in support of luminaries such as Paul Kelly, Sonic Youth’s Lee Ronaldo, Washington and Dean & Britta, amongst others. And that there is the paradox of Pony Face; a band equally at home in the registers of indie rock and shoegaze as they are country and folk music, drone, psychedelia and kaleidoscopic noise merchantry.

To the uninitiated Pony Face can appear unconventional, though further unravelling of their songs and sonic textures draw links between the crystalline intimacy of Sparklehorse, the dark rock noir of Rowland S. Howard and the uniquely Australian feel of Dirty Three. So who better to take on Bruce Springsteen’s bleak and affected 1982 Tascam-recorded demo album Nebraska?


Pony Face's version of Bruce Springsteen's State Trooper digs deeper into the affected first-person tale of a mind on the edge, replete with atmospherics and harmonics alternating focus to draw the listener into the driver's seat.

Other tracks by Pony Face: Open All Night  -  Atlantic City
%