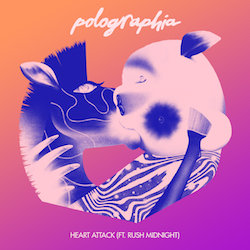 After signing with Sydney label Sweat It Out to join the likes of What So Not and RÜFÜS, the duo released their massive single “Sly” - a synth-pop offering featuring label mate Winston Surfshirt. The duo followed it up with the infectious sunset jam “Feels Alright” ft. Looks Fade, before finally releasing their Friends EP to critical acclaim. Currently sitting on over 7 million streams, Friends has seen support from triple j, FBi radio, Huffington Post and i-D, while Hilly Dilly and This Song Is Sick helped pushed the band onto a global pedestal.

Polographia celebrated their Friends EP release with a national headline tour, with handpicked support in Sydney, Melbourne, Adelaide and Perth. Along with their own headline shows, the duo have previously supported the likes of Snakehips, RÜFÜS and earlier this year Glass Animals, playing to sold out crowds across the nation.


“Heart Attack” is an ode to the glitz and glamour of New York funk featuring a lush vocal delivery from Brooklyn-via-LA vocalist Rush Midnight. A superior bass line defines the rhythm of the track, leading the slick synthesisers and buoyant melody into carefully laid out contours.