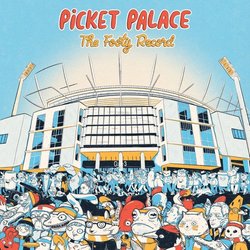 Birthed and nurtured in a sweaty loft apartment above a picket fence workshop in Brunswick, Picket Palace crank out razor-sharp punk belters and anxious, rambling reflections with an enthusiasm that is innocent, unpretentious and completely infectious. Urgent, punchy rhythms underpin distinctive, angular guitar lines and lyrics so honest and guileless that you'll feel like the band have set your own half drunken conversations to music.

Taking their name from the sharehouse apartment that brought the band together, Picket Palace consists of lead vocalist Seamus O’Connell, his brother Jack on guitar and vocals, Jack’s housemates Gus George on guitar and Julian Angelatos on drums, and their next-door neighbour Daniel Heeps on Bass.

Their upcoming release, The Footy Record, began almost as a joke, but the raucous, ridiculous energy of those songs yielded a record so brimming with euphoria, nostalgia and childlike rapture that it will seduce lovers of football and music alike. Their live show is an exuberant, exhilarating trip that is somehow both ferociously energetic and sincerely heartwarming; an adorable riot, not to be missed.


'Anthony McDonald-Tipungwuti’, is their breakthrough single that went viral, it is as thrilling as the player’s football game - electric and exhilarating and unpredictable and tenacious.

Other tracks by Picket Palace: All I Ever Want To Do  -  Don’t Argue
%