Philly - We On Feat. Steven Motlop 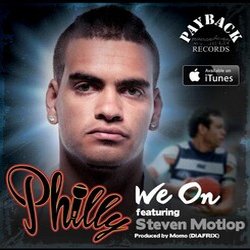 Phillip Murray aka Philly, 23, was born in the golden era of Hip Hop in 1991. By the age of four his older brothers had a huge collection and all he ever listened to was Hip Hop. The first song he could remember as a child was Naughty by Nature’s ‘Hip Hop Hooray’ - Philly’s destiny was set.
He began writing rhymes, dubbing beats & rapping in public. Philly soon became a Hip Hop sensation with a big following of kids in his hometown Mildura; his traditional homeland down Swan Hill side near the banks of Australia’s mighty Murray River.
The accolades flowed when Philly won the National Noel Tovey Achievement Award in 2010 and became Mildura’s NAIDOC Artist of the Year. He dreamed bigger dreams, signed with Indigenous music label Payback Records & aims now to perform in the US.
In August 2014 Philly won triple j’s Unearthed NIMA Competition that saw him perform with Briggs, Jimblah & The Last Kinection. “I feel like I’m dreaming,” he said on the night. The following week his debut single We On ft Steven Motlop from Geelong Cats & produced by Momo [Diafrix] shot to No.5 on iTunes Hip Hop chart.


Featuring Steve Motlop [Geelong Cats] and produced by Momo [Diafrix], We On is the debut single by emerging Hip Hop artist Philly. An anthemic track, with positive lyrics We On boasts a catchy chorus that hooks you in. Perfect for lovers of Hip Hop. RnB, Indigenous musicians and the footy.


Other tracks by Philly: Dreamchaser
%