Phil Murray - You're My Reason 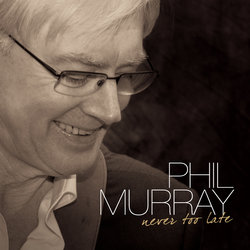 Phil Murray’s aptly entitled debut original album, Never Too Late, is the culmination of an inspiring story – about having the courage to change direction in life in order to fulfil a life-long dream.

Phil has been singing and writing songs for most of his life. But due to lack of opportunity as a youngster and subsequent family responsibilities, Phil’s underlying potential as a singer-songwriter remained unfulfilled.

Undaunted, as he entered the last phase of his working life, Phil seized the opportunity this presented. He tested his songs in national and international song contests achieving a national award nomination and three semi-final berths in the renowned UK Songwriting Contest. Phil realised it was not too late to pursue his dream.

Fittingly, the songs that emerged in the lead up to Phil’s debut album were in large measure a reflection of his own life’s journey – especially the relationships that have guided him. As a result, the songs deal with universal themes such as life, love and loss – but with a hopeful outlook that sits nicely with the album’s title Never Too Late.

Never Too Late is living proof that it never is too late to pursue your dream.


I once met a young woman whose beautiful, welcoming smile masked an incredible personal tragedy. I wrote this after finding out what her lovely smile and openness disguised. I hope this provides encouragement to those who carry such huge burdens and reminds others to offer their support.

Other tracks by Phil Murray: She Gave Me Love  -  Someone Out There
%