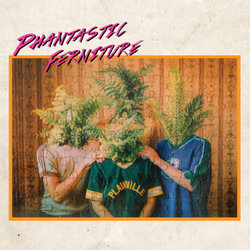 Phantastic Ferniture is the project of old friends Julia Jacklin, Elizabeth Hughes, Ryan K. Brennan and (formerly) Tom Stephens, who wanted to shake the shackles of their meticulously crafted solo work to experience a second, giddy adolescence. “I’d gone straight into folk music,” says Jacklin, “so every experience I’d had on stage was playing sad music with a guitar in my hand. I thought, I would love to know what it’s like to make people feel good and dance.”

Born out of a late night pact at Frankie's Pizza bar in Sydney in 2014 and united by fern puns and a love of leisurewear, the band met up whenever schedules would allow, writing songs and playing smatterings of dates, including their now legendary annual 'Christmas Extravaganza', to an increasingly devoted audience. Eventually it was decreed that this was no side project and an album should follow.

The brief? More spontaneous and less technical than their solo projects. “‘We wanted a low level of expertise, because a lot of good music comes from people whose passion exceeds their skill”. Jacklin says, “My first instinct was to go simple and sexy, like a lot of good pop music."