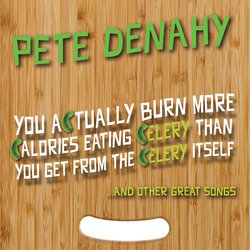 In 2007, Pete Denahy released a song called "Sort Of Dunno Nothin'" which went viral on youtube and radio stations around Australia. The song gained so much attention, it became better known than Pete Denahy himself, who until then was famous mostly in the wine cask areas of small town supermarket bottle shops. His fame has spread moderately since and he now enjoys being recognized in some of the larger shopping centres.

His comedy material includes such songs as The Petrol Head Fly, The Shopping Trolley, Bat In The Cave, The Target Song, Toilet Paper, Poker Machine and You Actually Burn More Calories Eating Celery Than You Get From The Celery Itself.

Pete's love of bluegrass music has taken him to Japan and the United States, making friends and picking tunes and songs with some of the best.

His main instruments are guitar and fiddle, although he also plays mandolin and some banjo.

He has several bluegrass releases including Wishbone Road and Singin' Shoes.


This is one of Pete Denahy's scientific songs. It is based on facts he heard from a taxi driver one evening.