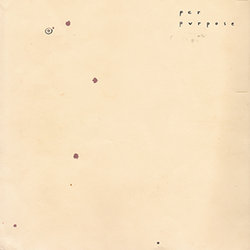 Forming in Brisbane in 2010, Per Purpose have released a string of singles ‘n short sittings as a three piece rock band bent on twisting and changing just out of definable characterization. 2012 saw Mitchell Perkins join the fold on guitar, and it is with this meticulous element they’ve put together an album that could have only been assembled by local rock scholars.

Circle the Stains is a sprawling mass of warbled trebly guitars & wound up right rhythm, crowned with huff and puff gusto. It is a remarkable deconstruction of what rock music can be – simultaneously achieving pop perfection while pulling everything to pieces and shoving nails in the cracks.

Recorded with Luke Walsh of Blank Realm over three nights in a concrete hangar in Brisbane, it is a true indicator of the direction of the ‘Brisbane sound’, guitars are prevalent in the mix but weaved in a way that creates new texture and direction; everything is loud and aggressive, perhaps a result of living in isolationism and unfriendly environments. And yet there is a bizarre, rolling rhythm to it all. For an idea of what is happening at the fore of Brisbane music, turn to Per Purpose.


A frantic, glorious mess, eclipsing little more than 4 minutes in length before completely self-destructing. Like a rude awakening from a dream, in which one's faint recollection questions it's existence in the first place.

Other tracks by Per Purpose: Isn't It  -  Points In Articulation