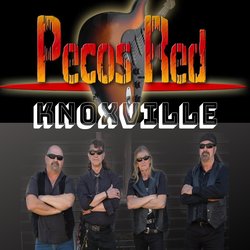 With the hugely successful show having run its course, Ross and Paul rekindled their passion for creating original material, recorded their first album Plains as Pecos Red and travelled to the United States to gauge how their music would be received.

Driven by a southern rock feel with overtones of the old wild west and coloured by Ross’s vocals - which by the grace of God have the soul and sound of his hero Johnny Cash’s stirring voice - many in the US music industry took note straight away as Plains started to chart across America with little effort and was quickly branded ‘Outlaw Americana’.

After an extended stint in Austin, Texas, the two returned to Australia and put pen to paper and fingers to frets to create exciting new material for the upcoming Badlands album.


Aussie band, PECOS RED debuts with Knoxville, a song already charting high across Europe and the continental U.S. thanks to its lively beat, outstanding guitar work and fine storytelling.

Knoxville is the first exciting release from PECOS RED’S album PLAINS, regarded in the U.S. music industry as a shining example of the best of Americana.