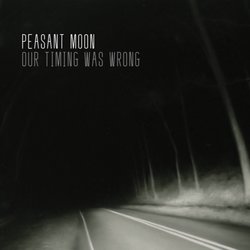 Since 2013, Peasant Moon (Harvey Russell and Josie Rothwell) have been building a reputation on the Sydney, Australia scene. They regularly perform across the city and toured to Melbourne, country Victoria, Newcastle and Adelaide. They have also developed a solid international presence, playing showcases at Canadian Music Week and recording in Austin, Texas in 2016.

In 2017 Peasant Moon played Tamworth Country Music Festival, culminating with an Americana in the Park showcase as well as a run of shows to launch the first single of their new EP, “Back in Time.”

Peasant Moon are expanding their sound on their new five track EP Our Timing Was Wrong. Recorded at Love Hz Studio in the inner west of Sydney, with producer Michael Carpenter, the EP finds the duo building on their sound with the successful addition of a full band on most tracks.

“We continue to view ourselves as a duo, but there was a natural point in the process where the songs seemed to open themselves up to a broader sound for these recordings. We’d also already begun to work with an ensemble for our live shows, built around Aaron's pedal steel,” explains Harvey, "a blend of alt-country and traditional country."


Over Again is a gambling song. It has a fuller sound and the instrumentation explodes a little here - bright and bold.

Other tracks by Peasant Moon: Our Timing Was Wrong  -  Party
%