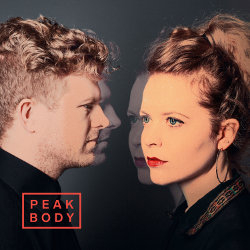 Peak Body is a duo from Hobart, Tasmania, consisting of Emma Marson (Catsuit) and Jordan Marson (Naked, Paint Your Golden Face). Together they create minimal yet lush pop music infused with elements of post-punk and indie electronica.

After releasing home-recorded tracks 'Fade To Black' and 'Home' in early 2015 (the former receiving national radio airplay via Triple J's Home & Hosed) Peak Body began performing regularly around Tasmania. Their debut gig was in fellow local band Heart Beach's lounge-room, the rousing success of which led to support slots for local pop sensation Asta, for interstate acts Pikelet, The Ocean Party, Bad Pony and Swim Season, as well as a slew of other shows in and around Hobart.

After a brief jaunt to Melbourne and Adelaide supporting Naked on their album tour in mid-2016, Peak Body began work on their debut EP. Recorded by Ivan Johnston at Frankies Empire (a cafe in Hobart), mixed by Ben Simms (Violet Swells, A. Swayze and the Ghosts) and mastered by Mikey Young, the five tracks perfectly capture the vibe and energy of the band, from minimal post-punk bass and drum machine grooves all the way through to fuzzed-out krautrock and psychedelia.