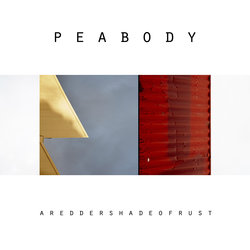 Sydney indie rock force, Peabody, have announced their much-anticipated new album, A Redder Shade Of Rust, to be released through ABC Music on October 12. The album is the band’s first in eight years and the lead single, Gemini, is out today.

Twenty-four years and counting, Sydney’s brave soldiers of indie-noise-guitar pop, post-punk and rock n roll are still treating creative output as if it’s the main game - Ben Chamie and Bruno Brayovic have now been in Peabody for more years than they haven’t, and they’re starting to treat it like a science experiment.

'A Redder Shade of Rust' is Peabody’s fifth studio album and the first since 2010’s 'Loose Manifesto'. It also might just be the band’s most cohesive album yet. Recorded in a brand-new school hall with Tim Kevin at the helm of knobs and Jamie Hutchings back in the producer’s chair (as he was for the first three albums), this album is ten tracks of pure indie-rock-pop joy and beauty.

Lead single, ‘Gemini’, is not an ode to the zodiac, but rather, a requiem for the humble Holden sedan.


'Gemini’ is about Ben's mum’s car that he used to borrow to drive to gigs, parties, to take girls on dates... We went to see Sidewinder play the Manning Bar one rainy Saturday night, only to find the entire front grill had been stolen. The indignity. It was a fine old machine that took us to where to action was.