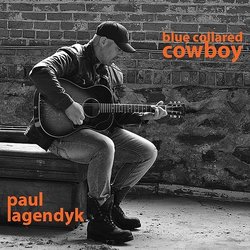 After a stint in Alberta's “oil patch”, the beating heart of Canadian country, Paul returned to Ontario to release his debut CD, “Shiny Rails to Nowhere" his follow up EP, “Canadian Country” produced by the legendary Andre Wahl.

His music has been inspired by the places he has been, the characters he has met and his deep, old time roots all of which come alive in his original compositions.

Paul has had the experience of bringing his sounds to audiences at The Smoke and Spurs Festival, The Hard Rock cafe (Toronto), The Huntsville Downtown street party, The Huntsville Beerfest and he has shared the stage with Jason McCoy, Wes Mack and Bobby Wills.

His songs have placed in the Top 200 nationwide in the CBC searchlight competition 2 years in a row and he enjoys regular rotation across 40 Canadian Radio stations and Sirius XM, Of note was Paul being awarded song of the year for two years on Hunter's Bay Radio.

Paul has now taken the next step in his music journey, bringing his blue collar sound to the studio and the live stage.


What I Needed, a duet with Australian,, Gina Horswood is about the different perspectives of a break-up.

The man typically goes out and drowns his sorrows. Doesn’t need anything or anyone on the outside. Blames her. His chorus is what he’s really feeling. The hurting and loneliness that he “didn’t need”.

The female perspective is emotional right from the beginning.