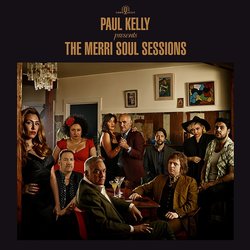 Over the past thirty years, Paul Kelly’s influential career has seen him release nineteen studio albums, several film soundtracks and two live albums. Soul and Gospel music has been one of his long-standing loves as evidenced in the work he’s done with Renee Geyer, Christine Anu, Emma Donovan and Vika and Linda. But he’s never done a whole album along those lines. Until now. Paul Kelly presents The Merri Soul Sessions. Performing alongside fellow artists and close friends on lead vocals - including Dan Sultan, Clairy Browne, Kira Puru, Vika Bull and Linda Bull - as well as his long-serving touring band: Peter Luscombe on drums and percussion; Bill McDonald on bass; Ash Naylor on guitar; Cam Bruce on piano and organ, and Vika & Linda Bull on harmonies. In Paul's words "we camped in Soundpark Studios, Northcote, right by Merri Creek and recorded a song a day. Sundays off. Our general routine was to rehearse with the band in the morning, getting the song into some kind of shape sonically and piecing out a rough arrangement. The singers would come in later and take it home."


Written by Paul Kelly and featuring Clairy Browne on vocals. Paul had written Keep On Coming Back For More about 7 years ago and sent the track for Clairy for this session. With no direction for Paul, Clairy made it her own. A "Lay Down The Law" vocal.

Other tracks by Paul Kelly: Keep On Coming Back For More (feat. Clairy Browne)  -  Righteous Woman
%