Paul Carroll - Dublin in My Tears 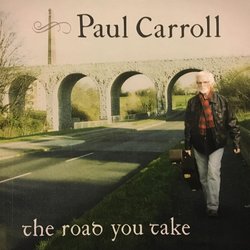 Dublin born singer Paul Carroll is a wandering troubadour, a musician who has lived and performed in Ireland, Australia and in his adopted home in the USA.
He's one of those rare singers who can bring an audience to a halt, engaging everyone in the room with his tales of Dublin streets, ballads of freedom, songs of revolution, unrequited love and heartache.
Paul grew up in Dublin during the ballad boom of the sixties where the pubs were packed with folk singers and ballad groups. It is there that he found a love for the music and songs that were to be part of his life.
He credits his mother for giving him the gift of song. She was a fine singer in her own right and he remembers fondly the “hooleys” in the house.
Paul emigrated to Australia in the early 70’s but he never strayed very far from the music, singing in the folk clubs of Sydney, Perth and Melbourne. During his time in Melbourne he was a founding member of the Celtic band, Poteen, who were Australia’s premiere Celtic band, sharing the stage with icons like Eric Bogle, The Dubliners, The Furey’s and Boys of the Lough.


Paul's home town of Dublin comes to the fore in this beautiful song - a lament for the past and a tribute to his upbringing and life before moving abroad.