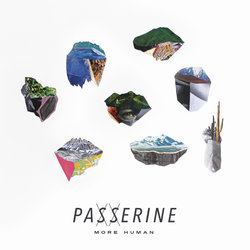 After featuring on the summer festival circuit (St Kilda Festival, Moomba, Australia Day, Roar Festival Dubbo) and embarking on two east coast tours, the trio delivered their sophomore EP, ‘The Morning After /The Night Before’. The 5 track EP featured single ‘Look Up’ and their bombastic, electronic reworking of Fleetwood Mac’s ‘Tusk’.

‘Synthetic Heart’ saw the trio move in a slightly different sonic direction, and for the first time they produced and recorded it themselves. Released in June, it was incredibly well received both in Australia and abroad.

Coming months will see Passerine back in the studio completing their third EP, due for release in April 2017. Summer will see them hit the festival circuit, including Folk, Rhythm and Life Festival and supporting Tkay Maidza at her Australian Open performance.


Penned after a trip into the Australian desert, More Human evokes the freedom and power of the raw natural landscape. More theatrical than the trio's previous releases, the track is driven by Dubar's ability to build tension: restrained, then grand and ascendant; Gooding's biting percussion, and Murphy's vivid, snarling foundation.