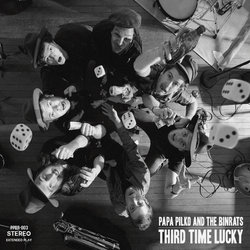 Their sound has been described as “wild blues and slick swingin’ country rock n’ roll… with horns”
and that’s exactly what this Sydney-based, band-of-seven deliver on their third EP release, ‘Third Time Lucky’.
To celebrate, they’ll take their notoriously raucous live show on the road for a stint of launch parties like no other.

Recorded at Linear Studios in Sydney, home to their previous two recordings, ‘Third Time Lucky’ could be the soundtrack to a Hunter S. Thompson, Western-style road movie. The opening track and first single ‘Poor Boy’, conjures up the energy of their stage show, most notably, in the ‘caged-animal’ vocal outro, a result of keeping the band’s frontman, Cyrus Pilko holed up in a windowless studio for three days! The song unravels into a rollicking, booze-soaked procession of barreling drums, soaring horns and sharp guitar licks led by Pilko’s howling vocals. In the same session they recorded ‘Good to be Bad’, a songwriting collaboration between Cyrus Pilko and trumpet player Tom Wilkinson. The inspiration varies from Russian criminal songs to getaway car chases and a few bottles of Sailor Jerry Spiced Rum! The finished product epitomizes the band’s sound both in the studio and on stage.


The song takes you on a rollicking, booze-soaked procession of barreling drums, soaring horns and sharp guitar licks led by Pilko’s howling vocals.