Papa Chango - Theme From The Matador 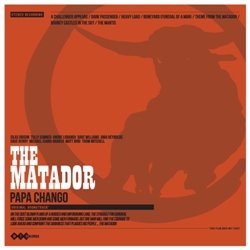 "On the dust blown plains of a rugged and unforgiving land, the struggle for survival will force some men down and some men forward. But one man will find the courage to look ahead and confront the darkness that plagues his people … The Matador"

Whether you’re lulled into a trance by the dark, visceral melodies or energized by the afro-inspired rhythms you will be moved by Papa Chango. With a line-up comprising horns, percussion, guitars and the mighty Farfisa organ, the Melbourne based 9-piece bring a modern flavour to the sounds of the 1970’s Ethio-jazz and afro-funk movements.

Papa Chango have held down long term gigs at venues across Melbourne including Bar Open, Northcote Social Club and The Espy, playing along side some of Melbourne's finest funk-merchants: The Public Opinion Afro Orchestra and The Cactus Channel, amongst others. Papa Chango have also made a solid mark on the festival scene, being return visitors to Folk Rhythm and Life, The Renaissance Music Festival and more. In early 2012 the band completed a successful tour of Tasmania, playing 8 shows over 10 days to hundreds of festival punters, pub goers, and via a live-to-air performance and interview on Hobart’s ABC radio.


"As the sun descends into an orange haze over the dusty, wind-swept town, our hero casts his gaze across the empty streets ... watching ... waiting ... and now, moving ... "

Other tracks by Papa Chango: A Challenger Appears  -  Boneyard