Amrap's AirIt | Australian Music Radio Airplay Project :: Rock :: Palace Of The King - One Of These Days

Palace Of The King - One Of These Days 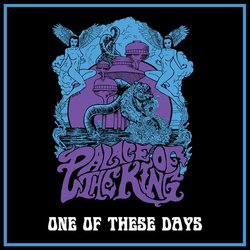 They’ve headlined three tours of Europe, spending 4 – 8 weeks on the road there every year since 2015. They’ve supported Airbourne in the U.K and France in front of thousands of rabid rock fans, played the USA twice in 2016 and 2017, headlined the Black Woodstock Festival in New Caledonia and circled Australia dozens of times in a tour van. They tour more than any of their peers because even though they’re a fully-fledged new millennium rock band, they also believe in the old school work ethic of the old school rock bands.

If you’ve never heard a Palace Of The King record before, then there is no better time than right now!


One Of These Days is the first single from the as yet untitled new album from Melbourne rockers, Palace Of The King.

Having toured the world supporting 2018's Get Right With Your Maker, the band show no signs of slowing down with this belter of a rock track!

POTK are touring with Rose Tattoo in June