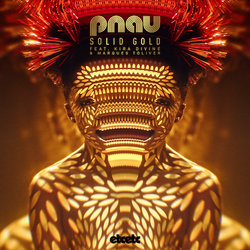 PNAU have an already-legendary career that spans two decades and five albums worth of music, including their cult debut Sambanova and 2007’s beloved self-titled LP, responsible for the songs ‘Wild Strawberries’, ‘Baby’ and ‘Embrace’. 2017 saw the release of their wildly successful album Changa, which saw the trio go triple platinum with the single ‘Go Bang’ and a massive quadruple platinum with ‘Chameleon’, both of which also picked up ARIA Awards for Best Dance Release (in 2017 and 2018 respectively). ‘Solid Gold’ is the first page in another new chapter for an act who, after an already stellar career, are more inspired than ever.


With ‘Solid Gold’, PNAU set out to capture the hypnotic, everlasting rhythm of old disco records. The song was inspired by Nick Littlemore’s explorations into world music and the sun drenched energy of Australia, incorporating live instrumentation to create a richer, fuller sound. It’s a banger built to soundtrack good times and also “the love of a best friend".