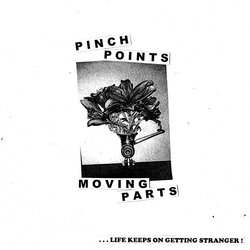 Melbourne post-punk outfit PINCH POINTS play clean, angular guitar harmonies and heavy mechanical riffs, belting-out group-vocals, all at a turbo-punk speed. J. Edward Keyes of Bandcamp Daily described their sound as “a barbed-wire coil of sound that’s as loose and springy as it is dangerously serrated.” Despite only having started gigging in May of 2018, PINCH POINTS are like a well oiled machine. They dropped their debut EP ‘MECHANICAL INJURY’ on cassette in July through Roolette Records, which ended up being 1 of 4 Australian albums included in Bandcamp's 'Best 100 releases of 2018', as well as getting an EU release through French label Six Tonnes de Chair. 2019 will see the band continue to gig frequently and release their debut LP on Roolette Records and Six Tonnes de Chair.